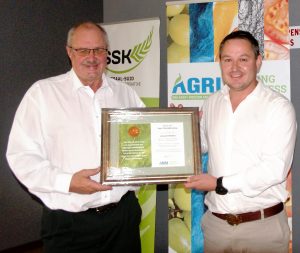 Jacques Beukes has served as a regional representative on the Agri Western Cape board for the past four years. In March 2019 he completed his term as respresentative and as a token of appreciation for his commitment and contributions to Agriculture in the Western Cape, he was presented with an honourary award by Agri Western Cape President Cornie Swardt.

“Jacques’ leadership and example as a progressive young farmer, as well as his contribution to creating and encouraging growth within the Western Cape’s agricultural sector deserve recognition and Agri Western Cape has presented him with this honorary award in recognition for his positive inputs to our sector,” says Jeanne Boshoff, communications manager for Agri Western Cape.